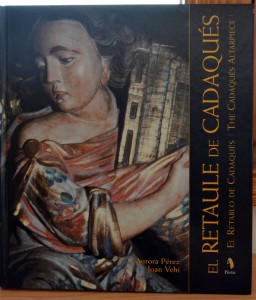 BOOK OF THE ALTAR MAYOR OF CADAQUÉS

As for religious art, we have a clear example in the Baroque church of Cadaqués, considered the most important in Catalonia because of its main altar and side altars.

At its main altar there are three sculptures of angels by Josep M. Martí, made in the early 90's, commissioned by Mossen Xavier Ferer, qpd.

The two consoles are sculpted wood, one golden in gold leaf and the other with silver (symbol of masculine and feminine). Exceptional sculpture of four expressive dragons expelling flames and flowers in the mouth towards the central part where the phoenix is found (mythological bird that rises from its ashes). The base is four dolphins (symbol of the divinity of the sea). The envelope is a fake Sicilian style polychrome marble.